Review of The Caged Queen by Kristen Ciccarelli 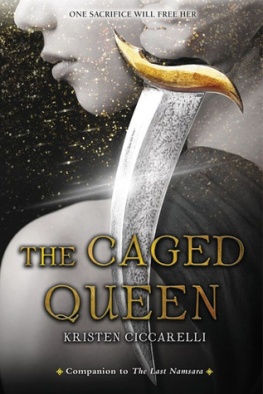 Once there were two sisters born with a bond so strong that it forged them together forever. When they were angry, mirrors shattered, and when they were happy, flowers bloomed. It was a magic they cherished—until the day a terrible accident took Essie’s life and trapped her soul in this world.

Dax—the heir to Firgaard’s throne—was responsible for the accident. Roa swore to hate him forever. But eight years later he returned, begging for her help. He was determined to dethrone his cruel father, under whose oppressive reign Roa’s people had suffered. Roa made him a deal: she’d give him the army he needed if he made her queen.

Together with Dax and his sister, Asha, Roa and her people waged war and deposed a tyrant. But now Asha is on the run, hiding from the price on her head. And Roa is an outlander queen, far from home and married to her enemy. Worst of all: Dax’s promises go unfulfilled. Roa’s people continue to suffer.

Then a chance to right every wrong arises—an opportunity for Roa to rid herself of this enemy king and rescue her beloved sister. During the Reliquishing, when the spirits of the dead are said to return, Roa can reclaim her sister for good.

This is the second in the Iskari series by Kristen Ciccarrlli and after reading the Last Namsara last year this was an easy pick up for me.Though the second in a series this book could easily be read as a stand-alone as it focuses on mainly characters that had minor roles in the first book.

Roa is a great character. Independent and yet reliant at the same time. Though the story is of her and Dax, a lot of the plot is based around her relationship and love for her sister which makes for a fresh and interesting read. I love how you get to learn so much about her background in this book. It flies between past and present so you are learning information valuable to the plot the whole way through.

This book has so many twists and turns that I almost got dizzy but this added to the intensity of the plot, and it definitely keeps you reading until the final pages. I loved how you kept changing your mind over who the true villain was, could it be Dax, Roa’s Husband and King who keeps going back on his promises and seems to want to sleep with everyone except his wife. Or Rebekah, the council member who seems to have the answer to Roa’s dearest prayer. You’ll have to read till the final pages to find out!

This is an easy 4/5 for me. There were times when I thought it was slightly predictable, and I wish we could have seen a bit more of Asha and Torwin from the first book, but overall a fantastic read and I will definitely be picking up the next in the series.