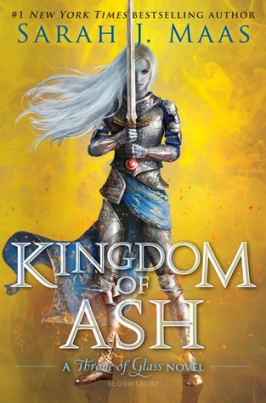 If you’re like me you will be eagerly anticipating the final addition to the Throne of Glass series by Sarah J Maas. I am so excited for this book!! This post is basically going to be me blabbering on about the series and some thoughts I’ve had about what might happen in the final book, so if you haven’t read the series you might not want to read on! Here’s a quick blurb:

Aelin has risked everything to save her people―but at a tremendous cost. Locked within an iron coffin by the Queen of the Fae, Aelin must draw upon her fiery will as she endures months of torture. Aware that yielding to Maeve will doom those she loves keeps her from breaking, though her resolve begins to unravel with each passing day…

With Aelin captured, Aedion and Lysandra remain the last line of defense to protect Terrasen from utter destruction. Yet they soon realize that the many allies they’ve gathered to battle Erawan’s hordes might not be enough to save them. Scattered across the continent and racing against time, Chaol, Manon, and Dorian are forced to forge their own paths to meet their fates. Hanging in the balance is any hope of salvation―and a better world.

And across the sea, his companions unwavering beside him, Rowan hunts to find his captured wife and queen―before she is lost to him forever.

As the threads of fate weave together at last, all must fight, if they are to have a chance at a future. Some bonds will grow even deeper, while others will be severed forever in the explosive final chapter of the Throne of Glass series.

Well thats my rant over! I probably have a million more thoughts but my minds mush when it comes to this series. Let me know if you have anything you need to be in the book or any ideas of what will happen!