“Everyone shush now,’ I said, taking a step towards the guards. ‘I’m about to be impressive.”

Falcio the Kings Heart, Kest the Kings Blade and Brasti the Kings Bow, greatcoats to the murdered king, try to fulfil their kings last wish of finding his Chariotes. It comes as quite a shock to all when the kings “Chariote” turns out to be a young girl named after Falcio’s dead wife, Aline. As civil war threatens to take over the County, Falcio and the Greatcoats have no shortage of battles, from Dukes, God’s, and even their own, in their way before they can complete the Kings final plan to reunite the Greatcoats and bring Law back to the land.

I don’t think I can put into words how much I love this series! The books are told from the view point of Falcio Val Mond First Cantor of the Greatcoats, who is hilariously witty, heartbreakingly sincere and undoubtedly tortured, which makes his voice so unalike many others out there. These books have made me cry, cringe,  laugh out loud and whoop with Joy!

This series is a 7/5 for me! Honestly though I could not recommend it enough! If you love Swashbuckling Fantasy mixed in with magic then this is the series for you… just prepare yourself for the ending! Ive already added De Castells Spellslinger to my TBR pile.

The Mistborn Trilogy by Brandon Sanderson 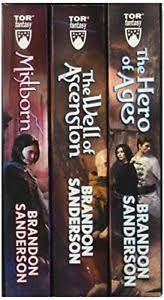 “You should try not to talk so much, friend,” he suggested. “You’ll sound far less stupid that way.”

The series follows Vin a street Urchin with an incredible power she has no idea she has, and Kelsier a Mistborn and Criminal mastermind. When Kelsier sees Vin unknowingly using her power she gets dragged into a Heist of grand proportions. To overthrow the empire and Kill the Lord Ruler in the process.

One of the things I loved about this series was there were no characters that didn’t add something important to the plot. The minor chatacters; Breeze, Ham, Dockson, Sazed and Tensoon have some of the best lines and the story would not be fulfilled without all of them playing their part. Sanderson’s foreshadowing is amazing, to the point where I had to go back to try and work out how I didn’t see certain parts coming! The plot unwinds beautifully, so much so that you don’t want it to end.

This series is a 4.5/5 for me. I loved the story line, characters… pretty much everything, however, there were parts that just dragged for me and some of the Allomantic fighting scenes seemed slightly overdone. Overall though I would highly recommend and have Sanderson’s Way of Kings on my TBR list already!

“For a terrifying moment I thought he was going to hug me, but fortunately we both remembered we were English just in time. Still, it was a close call.”

Probationary Constable Peter Grant has dreams of being a Detective in London’s Metropolitan Police. That is until he witnesses a Ghost at a crime scene and gets introduced to Detective Chief Inspector Thomas Nightingale. Through Nightingale Peter is plunged into a world where Wizards exist, Thames is a Goddess and Mr Punch is more dangerous than you could imagine!

I Picked up this series when I saw it described as “Harry Potter mixed with The Bill” which sums the series up perfectly. One thing I liked was that Aaranovitch didn’t make magic “easy.” It took Peter hours of study and practice to create a “werelight” the easiest form of magic. This really helps you to bond with him as you feel you are learning the magic along with him, and because of that you get a great sense of pride when he completes his first magical task:

This series was another 5/5 for me. I loved the series and the fact that it was set in London made it easier for me to imagine the scenes. There is a lot of English colloquialism but it is easy to understand in the context. A must read for any Terry Pratchett fan and anyone who like me grew up with Harry Potter and now needs a little adult magic in their life!